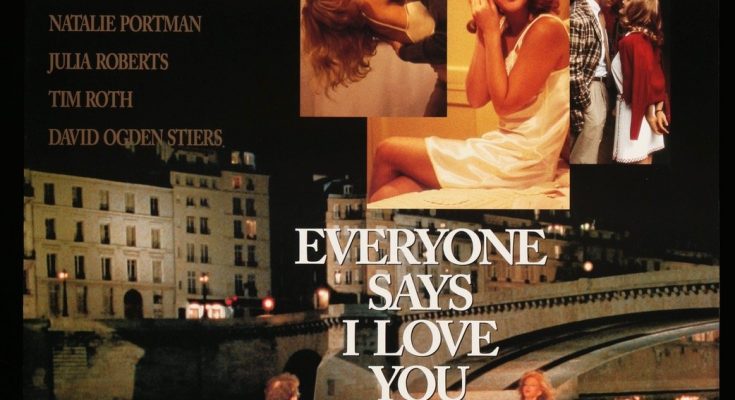 Everyone Says I Love You is a 1996 American musical comedy film written and directed by Woody Allen. Set in New York City, Venice and Paris, the film features singing by actors not usually known for their singing.

See Everyone Says I Love You full cast.

My Baby Just Cares For Me

I’m Thru with Love

Everyone Says I Love You: Critical Response

“This is a wonderfully funny story, affectionately parodying old-time musicals, and evoking a nostalgic regret that they are not being made any more. Some of the vocalizations are amateurish (Alan Alda is an exception) but Dick Hyman’s musical arrangements and the performances of the musicians are fine.”

“I never believed in God. No, I didn’t even as a little kid. I remember this. I used to think even if he exists, he’s done such a terrible job, it’s a wonder people don’t get together and file a class action suit against him.”

Natalie Portman is one of the few actors who believes Dylan Farrow. The video below begins automatically at 5:01 with Portman saying “I believe Dylan.”

Natalie Portman was quickly rewarded with a tweet from Dylan Farrow:

Grateful to see the full clip and transcript from @CBSSunday, a heartfelt thank you to Natalie Portman as well for her belief and support.https://t.co/smx8hdl9Pf

10 Things About Everyone Says I Love You