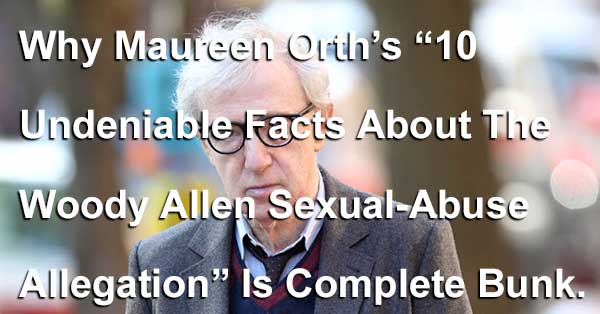 Maureen Orth’s article in Vanity Fair, “10 Undeniable Facts About The Woody Allen Sexual-Abuse Allegation”  is complete bunk. It is a distorted exercise of full-on mendaciousness from beginning to end.

The facts are either flat-out-false, entirely deniable, or misleading and irrelevant

The facts Maureen Orth cites as “undeniable” are either flat-out false, entirely deniable, or misleading and irrelevant due to the fact that Orth purposely omits other, more important facts that cast doubt on the allegations.

The video will begin at 20:24, with Maureen Orth admitting she passed height hours with the fact-checkers and that they weren’t going to allow the piece to be published until she had a written letter from Mia Farrow saying if they get sued, she would be a witness to say what she said was the truth from her point of view.