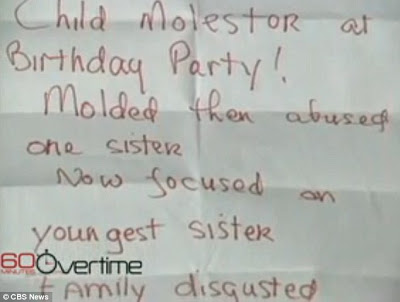 Among those who know nothing about the case but “believe” Dylan Farrow, an overwhelming majority cites as evidence Woody Allen’s relationship with Soon-Yi Previn, Mia Farrow’s 21 years old adoptive daughter.

Of course, it’s deeply silly: young women or even teenagers are not 7 years old prepubescent little girls! However, we should remember that the association between Soon-Yi and Dylan was used from the beginning by Mia Farrow herself.

As pointed out in the video below, the note is also mentioned in the interview given by Woody Allen to Steve Kroft in 1992: (the video begins directly at 3:04, analyzing the note):

“… or we have to believe, more plausibly, that this allegation of child abuse had been percolating in her mind for some time. It stretches credulity to breaking point to suggest that Woody Allen commits his one and only act of child molestation upon his own daughter a few weeks after being accused by a vengeful ex-partner of wanting to commit that very crime. This malicious note perfectly demonstrates the mindset Mia Farrow is entering the aftermath of discovering Woody Allen’s affair with Soon-Yi. “

“This episode is significant for several reasons. It shows that Farrow called Allen a “child molester” prior to the alleged sexual assault, projecting his sexual relationship with Soon-Yi onto his paternal relationship with Dylan. It suggests that others around them were probably predisposed to do the same.”  (Cathy Young – ‘Allen v. Farrow’: Intellectually Dishonest Propaganda Meets Emotional Blackmail)

The Doctor John Leventhal who headed the Connecticut investigation into whether Woody Allen molested his 7-year-old daughter, Dylan, theorized that the child either invented the story under the stress of living in a volatile and unhealthy home or that it was planted in her mind by her mother, Mia Farrow: “Even before the claim of abuse was made last August, the view of Mr. Allen as an evil and awful and terrible man permeated the household. The view that he had molested Soon-Yi and was a potential molester of Dylan permeated the household.”

Eventually, Mia Farrow herself confirmed in his memoir that she wanted to use Woody’s relationship with Soon-Yi who was between 19 and 21 years old, as an evidence that Woody Allen could sexually abuse a 7 years old child:

Woody Allen has Mentioned the Attempt to Make the Link

The video below will begin exactly when Woody Allen speaks about people trying to link is relationship with Soon-Yi with the sexual abuse allegation:

Mia Farrow Asked to Stacey Nelkin to Lie About her Age

And if it wasn’t enough, Mia Farrow tried to convince Stacey Nelkin to lie by telling she was underage when she was dating Woody Allen:

So, as silly – and both disgusting and despicable – it could be, maybe we shouldn’t be surprise that so many people believe that Woody Allen sexually abused his 7 years old adoptive daughter, Dylan Farrow, because he was romantically involved with Soon-Yi Previn.

Are these people really stupid or sexually disturbed or just  looking for a pretext to falsely accuse Woody Allen?

When people defend Woody Allen it’s hard to understand what they are defending. He admits to much of it himself. He is obsessed with children and vulnerable young women. Are they saying he groomed and molested this child but not that child? https://t.co/I0564UaAb1

Even without viewing the documentary/knowing any of the facts, I have always believed that it was probable that you were telling the truth. Woody married his step daughter. That anyone has made a movie with him or watched his movies in years is despicable.

#AllenVFarrow #HBO #HBOMax
If Woody Allen thought that it was completely fine marrying one of the children I can only imagine what was really happening to Dylan Farrow when she was so young.

Amazing that a man can marry his partner’s adopted daughter, 35 years younger than him, whom he helped raise, but people still don’t believe he’s an abuser #AllenVFarrow

Amazing that in 2021 uneducated people still bleat with the flock that Woody Allen helped to raise Soon-Yi Previn when both Soon-Yi Previn, Justice Wilk and even Mia Farrow have confirmed that he was never a paternal figure for her when she was a child.

He marries his stepdaughter and somehow SHE is the weird one.

Why would she need to make him look worse with Dylan? I mean, he already looked bad. And sorry, but I find it totally believable that if he went there with Soon-Yi he was going there with Dylan

Woody Allen and Mia Farrow were never married and never lived together. In fact, Woody never once stayed over night at Mia’s apartment in 12 years.