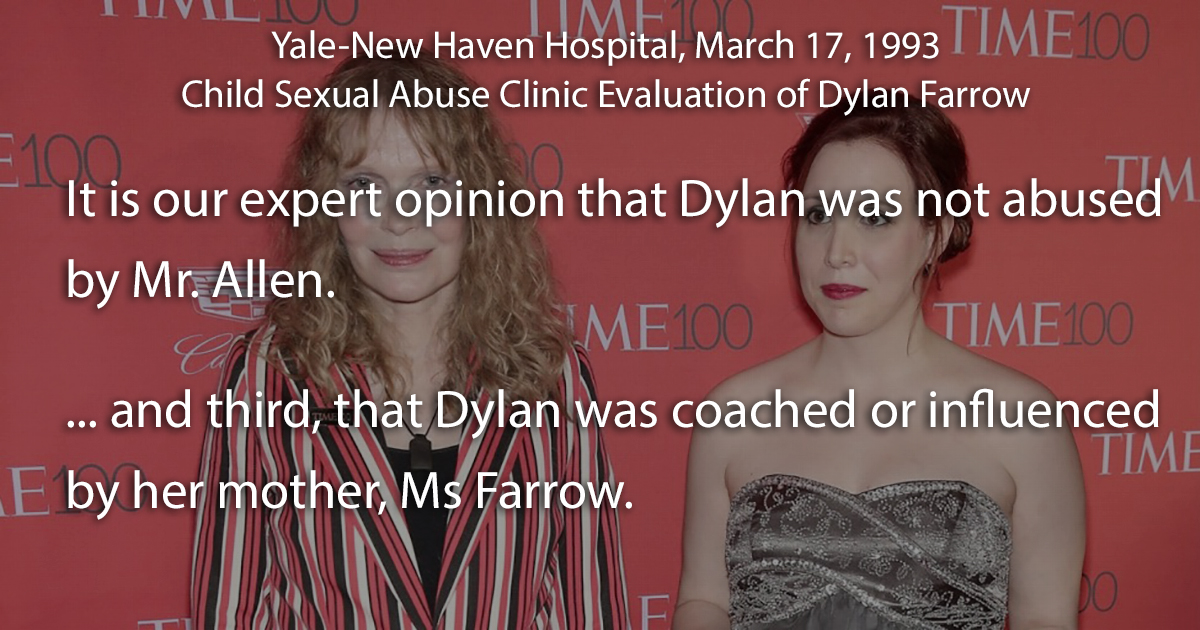 Skip the introduction about the sexual abuse allegation against Woody Allen by Dylan Farrow and go directly to the report: Child Sexual Abuse Clinic Evaluation of Dylan Farrow

Below is the report of the Child Sexual Abuse Clinic Evaluation of Dylan Farrow by the Yale-New Haven Hospital.

The referral was made by the Connecticut State Police at a meeting of the Police, State’s Attorney Frank Maco, and members of the Child Sexual Abuse Team.

The report completely dismisses Dylan Farrow sexual abuse allegation and clears Woody Allen: “It’s our expert opinion that Dylan was not sexually assaulted by Mr. Allen. Further, we believe that Dylan’s statements on videotape and her statements to us during our evaluation do not refer to actual events that occurred to her on August 4, 1992.”

On October 7, 1993, a second independent 14-month-old investigation, from the New York State child welfare, cleared a second time Woody Allen and declared the Dylan Farrow sexual abuse allegation unfounded: “No credible evidence was found that the child named in this report has been abused or maltreated. This report has, therefore, been considered unfounded.”

Before or after reading the report, you can follow some links and learn more about inconsistencies in Dylan Farrow’s statements, the Yale-New Haven Hospital and the Dr. Leventhal.

Dylan Farrow (BD 7/11/85, Unit # 1502912) was referred to the Child Sexual Abuse Clinic of Yale-New Haven Hospital in September 1992. The referral was made by the Connecticut State Police at a meeting of the Police (BeatriceFarlekas and John Mucherino), State’s Attorney Frank Maco, and members of the Child Sexual Abuse Team. At that meeting, the history that the police had at the time was briefly presented, and the videotape (taken by Ms.Farrow) of Dylan telling what had reportedly happened to her was reviewed. Two major questions that were posed in the referral were:

Is Dylan telling the truth, and did we think that she was sexually abused?

To determine the meaning of Dylan’s statements and whether they were true, we interviewed her on nine occasions. In addition, because the family context and Dylan’s past psychiatric history are important in understanding the meaning of her statements, we met with both of her parents, two babysitters, and two psychotherapists who had evaluated and treated Dylan and Satchel.

The chronology of our evaluation is outlined below:

9/08/92 — Meeting with State Police and State’s Attorney Maco for presentation of case.

9/15/92 — Meeting of Ms. Sawyer and Detective John Mucherino to present more details of the information known by the police.

In summary, Dylan presented as an intelligent, verbal 7-year-old whose story telling was quite elaborate and fantasy-like at times and who manifested loose associations in her thinking. She appeared confused about what to relate to the interviewers and was very controlling of what she would say. In her statements and her play she elaborated interrelated themes. She was upset by the loss of her father and Soon-Yi and worried that her father might take her from her mother’s care. She felt protective of and worried for her mother. Dylan was very much attuned to her mother’s pain, and her mother reinforced Dylan’s losses and her negative view of her father.

Assessment of Whether Dylan was Sexually Abused:

It is our expert opinion that Dylan was not sexually abused by Mr. Allen. Further, we believe that Dylan’s statements on videotape and her statements to us during our evaluation do not refer to actual events that occurred to her on August 4, 1992. Our initial impression was formulated in December 1992 before reviewing any outside materials and before meeting with anyone outside the family except the Connecticut State Police and Kristie Groteke, a babysitter. Our opinion was reinforced by the additional information that we gathered throughout the rest of the evaluation.

(1) There were important inconsistencies in Dylan’s statements in the videotape and in her statements to us.

(2) She appeared to struggle with how to tell about the touching.

(3) She told the story in a manner that was overly thoughtful and controlling. There was no spontaneity in her statements, and a rehearsed quality was suggested in how she spoke.

(4) Her descriptions of the details surrounding the alleged events were unusual and were inconsistent.

The report suggests that Mia Farrow could have coached or influenced Dylan Farrow’s sexual abuse allegation:

“…;and third, that Dylan was coached or influenced by her mother, Ms. Farrow.”

A Son Speaks Out

Moses Farrow is Woody Allen and Mia Farrow adopted son. His testimony, A SON SPEAKS OUT, by Moses Farrow, has been published on May 23, 2018, and confirms that his mother, Mia Farrow, has coached Dylan Farrow:

“Those conclusions perfectly match my own childhood experience: coaching, influencing, and rehearsing are three words that sum up exactly how my mother tried to raise us. I know that Dylan has recently referred to this brainwashing theory as “spin” by our father – but it was nothing of the sort. It was not only the conclusion reached by a state-ordered investigation, it was the reality of life in our household.”

Moses Farrow had previously publicly denounced that the allegation of sexual abuse against Woody Allen was the result of Dylan’s brainwashing by Mia Farrow:

So many times I saw my mother try to convince her that she was abused – and it has worked. Some day, I hope Dylan can escape from my mother, confront the truth and begin her own healing. #truthislouder

More tweet by @MosesFarrow about the sexual abuse allegation against Woody Allen by Dylan Farrow.

In 1992, Moses Farrow was already saying that Mia Farrow had made up the sexual abuse accusation against Woody Allen

According to the Los Angeles Times:

The nanny Monica Thompson said on deposition that on one occasion almost immediately after the alleged incident, Moses Farrow, 14, another child Allen and Farrow adopted, indicated doubts about what, if anything, had taken place.

“Moses came over to me and said that he believes that Ms. Farrow had made up the accusation that was being said by Dylan,” Thompson said in an affidavit.

About Justice Wilk and the unavailability of the notes

Because Woody Allen was famous and because of his relationship with Soon-Yi Previn, Mia Farrow’s 21 years old adoptive daughter, Justice Wilk who ruled the custody trial and was married to a feminist attorney, was openly biased against him.

The notes of the team members were destroyed prior to the issuance of the report, which, presumably, is an amalgamation of their independent impressions and observations. The unavailability of the notes, together with their unwillingness to testify at this trial except through the deposition of Dr. Leventhal, compromised my ability to scrutinize their findings and resulted in a report which was sanitized and, therefore, less credible. – Justice Wilk, Supreme Court Document

It is common practice to destroy notes and expunge case files in instances where allegations of abuse are unfounded, as was the case with the allegations against Allen.

In fact, before 1996, many states required the expungement and destruction of the case file immediately after such a finding in order to protect privacy and due process rights of those falsely accused.

Paul Williams was assigned to investigate Dylan’s accusations in August 1992 and found them credible. In early 1993, there were media reports that Williams was taken off the case because he resisted high-level pressure to bury it.

According to his file, he was reassigned because people he interviewed complained that he was “rude” and biased against Allen. He even asked to Woody Allen if, when he was a teenager, he had sexual relationship with his younger sister.

Williams’s allegations of top-down pro-Allen pressure prompted an official inquiry by the New York City Human Resources Commissioner, which presumably found no wrongdoing. But the HBO documentary “forgets” to mention it.

As he “forgets” to mention that during the Allen/Farrow custody trial, New York State Supreme Court Justice Elliott Wilk—who was openly biased against Woody Allen—rejected the request by Farrow attorneys to recognize Williams as a child sexual abuse expert.