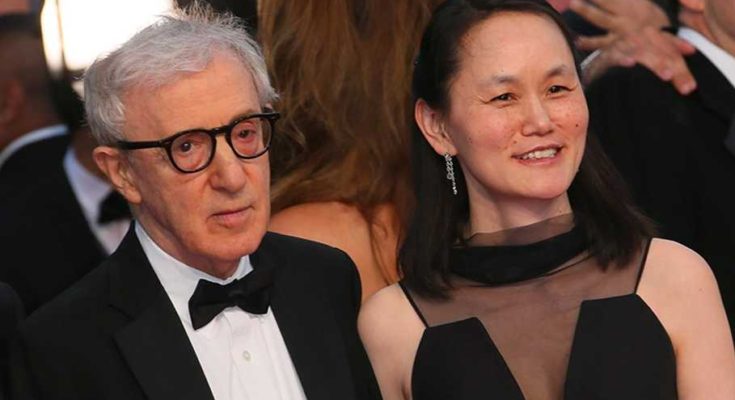 Woody Allen has never been married with Mia Farrow. Soon-Yi Previn is not Woody Allen’s daughter or Woody Allen’s stepdaughter, her father was André Previn.

Soon-Yi Previn Allen and Woody Allen have been romantically involved since December 1991. They married in Venice in December 24, 1997.

How Journalists Attacked a Victim of Abuse

Mia Farrow was the first one who wanted to use the relationship as a weapon against Woody Allen.

Everyday, thousand of people who know absolutely nothing about the Woody Allen’s case come to claim on social networks that Woody Allen sexually abused his 7 years old adoptive daughter, Dylan Farrow because he married his (underage) (adoptive) (step)daughter.

Not only it’s silly – young women are not prepubescent little girls, what do you think people should believe about somebody who cannot make the difference between a 19 years old woman and a 7 years old child? – but it’s also completely wrong.

Woody Allen and Mia Farrow have a 12 years relationship. But they were never married and never lived together. Woody Allen lived in his apartment on Fifth Avenue. Mia Farrow and her kids lived on Central Park West.

In fact, Woody never once stayed over night at Mia’s apartment in 12 years.

Before to be married with her, Woody Allen was never a paternal figure for Soon-Yi Previn

Not only the daughter of André Previn isn’t Allen’s daughter or stepdaughter, but he was never a paternal figure for her when she was a child, as confirmed both by Soon-Yi…

Please don’t try and dramatize my relationship with Woody Allen. He was never any kind of father figure to me. I never had any dealings with him. He rarely came to our apartment before his own children were (mistake, own child was) born. Even then, he never spoke and the truth is I never cared that much for him. He was always preoccupied with work and never talked to me. Not really to any of us. Only when Dylan (mistake, you must read Satchel, Ronan previous name) was born did he start visiting regularly and then only to play with the baby. My own father is Andre Previn, who came to visit pretty often and took us all out frequently. When I first got friendly with Woody, he and Mia were finished with their romance and were just friends. I think Mia would have been just as angry if he had taken up with another actress or his secretary.

…and the Supreme Court, Justice Wilk: “Until 1990, although he had little contact with any of the Previn children, Mr. Allen had the least to do with Soon-Yi.“

According to Mia Farrow’s memoir, What Falls Away, when Soon-Yi Previn was a child, his dislike for Woody has always been palpable and he didn’t even take her for a walk or to buy an ice cream.

I can only suppose it had never occurred to my children that their mother would ever do anything that could result in pregnancy. It was an adjustment for all of them, and they seemed a little stunned at first, particularly Soon-Yi, whose dislike for Woody had always been palpable. Because she had arrived in our family just as André was leaving it, I worried that she had lacked a positive male role model in her life. So when she was little, I asked Woody several times if he would take her for a walk, buy her an ice cream or something, but he had declined. Now, when I told her I was pregnant, she burst into angry, uncomprehending tears. She didn’t like Woody, she said, he was nasty and ugly, and the baby would be ugly like him. I held her and tried to reassure her.

Woody Allen was paternal during their relationship, not before

In a 2015 interview with Sam Fragoso for NPR, Woody Allen stated:

“I’m 35 years older, and somehow, through no fault of mine or hers, the dynamic worked. I was paternal. She responded to someone paternal.”

They are not the fist couple built on this dynamic. You don’t need to know a woman when she was a child to be paternal whit her. Still, some people are not ashamed to use this Woody Allen’s sentence out of its context as an evidence he groomed his wife when she was a child. The lecture of the present page or a simple check on Wikipedia clarify everything:

“He has called his own role in their adult relationship as ‘paternal’, while denying (uncontested by Mia Farrow) any parental or paternal role over Soon-Yi during her upbringing.”

The list of following facts are from Robert B. Weide‘s article The Woody Allen Allegations: Not So Fast (you can find more articles about Woody Allen by Robert Weide on this page).

According to Soon-Yi testimony (Let’s Not Get Hysterical), “When I first got friendly with Woody, he and Mia were finished with their romance and were just friends.” Mia Farrow was Dory Previn’s friend: she became pregnant by Andre Previn when they were still married.

“Granted, he looks a lot like Frank with the blue eyes and facial features, but if so what does this say?. That all during the custody hearing Mia lied under oath and falsely represented Ronan as our son? Even if he is not Frank’s, the possibility she raises that he could be, indicates she was secretly intimate with him during our years. Not to mention all the money I paid for child support. Was I supporting Frank’s son?”  Woody Allen

Mia Farrow married Frank Sinatra on July 19, 1966. She was 21 and he was 50. They divorced two years later. Soon-Yi Previn married Woody Allen on December 24, 1997. They are still married after a 27-year relationship.

Still, you can find the relationship creepy, no problem. But it doesn’t make Woody Allen a sexual abuser of Dylan Farrow, his 7 years old adoptive daughter.

The couple has been now happily married since 1997 and have two adult adoptive daughters, Bechet and Manzie Allen. What do you think are they feelings when mob trials apologist call their father a pedophile? Especially when some stupid and disgusting people post this photo with some legend like “Pedophile Woody Allen with his child wife Soon-Yi.” ?

Bechet Allen has posted about his father on her Facebook page: “He has been nothing but supportive and loving, and now it is my turn to support him.”

If you think that “this poor Soon-Yi herself is a victim of this creepy Woody Allen”, you should read some undeniable facts about Mia Farrow and also A SON SPEAKS OUT, Moses Farrow testimony:

“Soon-Yi was her most frequent scapegoat. My sister had an independent streak and, of all of us, was the least intimidated by Mia. When pushed, she would call our mother out on her behavior and ugly arguments would ensue. When she was young, Mia once threw a large porcelain centerpiece at her head. Luckily it missed, but the shattered pieces hit her legs. Years later, Mia beat her with a telephone receiver. Soon-Yi’s made it clear that her desire was simply to be left alone, which increasingly became the case. Even if her relationship with Woody was unconventional, it allowed her to escape. Others weren’t so lucky.”

Poor Soon-Yi… really a shame that she didn’t stay with Mia Farrow. How wonderful could have been his life is she had to create an account on GoFundMe like her sister Quincy because her mother Mia Farrow with a $60 Million Net Worth couldn’t help her.

Poor Soon-Yi… because of Woody Allen she didn’t have the opportunity to become a drug addict and to die from AIDS in poverty at 35 like her sister Lark Previn.

Poor Soon-Yi… she could have killed herself when she was 21 like her sister Tam but this creepy Woody Allen didn’t let her this wonderful opportunity.

Poor Soon-Yi… she could have killed herself when she was 27 years old, like her brother Thaddeus Wilk Farrow (Wilk to thank the judge who was biased against Woody Allen and said Mia Farrow was a good mother and Woody Allen a bad father when many testimonies said that Woody Allen was a good father and Mia Farrow an abusive mother) but this creepy Woody Allen… again.

Poor Soon-Yi… she could have been abused by Mia Farrow like her brother Moses Farrow. But this creepy Woody Allen… one more time.

Poor Soon-Yi… married with Woody Allen and traveling around the world with him and their two daughters Bechet and Manzie and forced to meet all the talented and smart people who love working with him.

Poor, poor Soon-Yi: she’s a victim and she even doesn’t know it.

The Horrible Treatment of Asians in America

Woody Allen and the Wrong Survivor