‘Allen v. Farrow’: 10 Shocking Revelations From the HBO Documentary Series is an article written for Variety by By Marc Malkin and Cynthia Littleton.

The title is misleading: at least 90% of the “revelations” are well known, some of them since 1992. 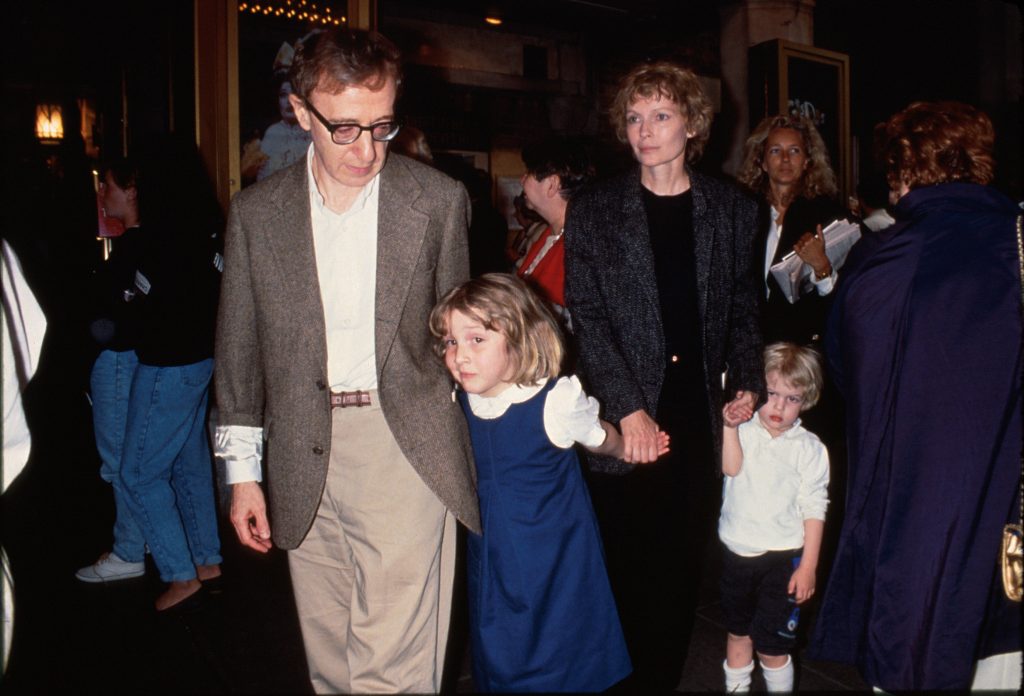 Some lies and manipulations are already available in “10 Undeniable Facts About The Woody Allen Sexual-Abuse Allegation” written by Maureen Orth for Vanity Fair, a distorted exercise of full-on mendaciousness from beginning to end. The facts she cites as “undeniable” are either flat-out false, entirely deniable, or misleading and irrelevant due to the fact that Orth purposely omits other, more important facts that cast doubt on the allegations.

RELATIF CONTENT. A more detailed article is available HERE: you should read it in priority.

A testimony by Farrow’s longtime friend Casey Pascal. Do you know that the beginning of the sexual abuse allegation came from Casey Pascal’s too?

“I understood why she was worried, because it [Mr. Allen’s relationship with Dylan] was intense, … I did not see it as sexual, but I saw it as inappropriately intense because it excluded everybody else, and it placed a demand on a child for a kind of acknowledgment that I felt should not be placed on a child …”

She testified that she worked with Mr. Allen to help him to understand that his behavior with Dylan was inappropriate and that it had to be modified. Dr. Coates also recommended that Dylan enter therapy with Dr. Schultz, with whom Dylan began treatment in April 1991. – Supreme Court document

A few months into the pregnancy, Ms. Farrow began to withdraw from Mr. Allen. After Satchel’s birth, which occurred on December 19, 1987, she grew more distant from Mr. Allen. Ms. Farrow’s attention to Satchel also reduced the time she had available for Dylan. Mr. Allen began to spend more time with Dylan and to intensify his relationship with her. – Supreme Court document

Statute of limitations doesn’t prevent Dylan Farrow to take Woody Allen in civil court. Criminal prosecution could still be an option if she had not changed her story regarding allegations of sexual abuse and could still be allowed.

At least Variety has used “alleged” cuddling. And for good reason: there is nothing about this in the Supreme Court document.

Of course, once again, the allegation came from the Farrow side. If it’s true, why On Dec. 17, 1991, when Woody Allen officially adopted Dylan and Moses Farrow as a co-adoptive, single parent, Mia Farrow filled an affidavit praising Woody Allen’s parenting skills ?

Farrow’s affidavit said Woody Allen, was “far more of a father than most natural fathers are or choose to be” and that he is “a loving, caring, attentive parent to Dylan and she can only benefit from having him as an adoptive father. He has acted as Dylan’s father almost since her birth and adoption by me….He is present with us during nearly all of Dylan’s waking hours.”

The affidavit is mentioned in the Supreme Court document. Did you heard about it in the HBO documentary ?

So funny! “…a call from a noted psychologist…” No name, completely unverifiable. But even if it’s true, again, read 1. Allen’s Earlier Behavior: it’s always the same manipulation.

“After that, Allen agreed to see a therapist.” This is a lie and again – again! – read 1. Allen’s Earlier Behavior : At Dr. Coates’ request, both parents participated in Satchel’s treatment. In the fall of 1990, the parties asked Dr. Coates to evaluate Dylan to determine if she needed therapy. (…) “She [Dr. Coates] testified that she worked with Mr. Allen to help him to understand that his behavior with Dylan was inappropriate.”

Woody Allen didn’t agreed to see a therapist because Mia Farrow got a phone call but because, at Dr. Coates’ request, both parents participated in Satchel’s treatment and in the fall of 1990, the parties asked Dr. Coates to evaluate Dylan to determine if she needed therapy.

This is an old lie – not a shocking revelation! – already used by Maureen Orth for Vanity Fair:

2. Allen had been in therapy for alleged inappropriate behavior toward Dylan with a child psychologist before the abuse allegation was presented to the authorities or made public.

Again, an old song: Woody Allen is a powerful man, Mia Farrow is not a powerful woman, Dylan Farrow has been silenced.

Whatever you already know about this tangled and painful situation, you’ve only heard half: the case against Mia Farrow. This is the other half and it isn’t any prettier. It concerns Woody Allen’s behavior and what it has done to Mia Farrow and the 11 children involved. The author breaks new ground on one of the year’s most shocking stories.

January 18, 2018: Dylan Farrow is interviewed on CBS this morning.

I was present for everything that transpired in our house before, during, and after the alleged event.

What about an other singer who was friend with Mia Farrow, Dory Previn? She even wrote Beware of Young Girls, a song especially dedicated to Mia Farrow:

She was my friend, my friend
My friend, she was invited to my house
Oh yes, she was and though she knew

In 1968 Mia Farrow began an affair with conductor André Previn who was married with her friend, the singer-songwritter Dory Previn.

In 1969 Dory Previn discovered that Mia Farrow had become pregnant by her husband, which led to their separation. Dory Previn, who had a history of emotional fragility and mental illness, fell apart. Fearful of traveling in general and of flying in particular, she had a breakdown on an airplane that was waiting to take off, shouted unintelligibly and tore at her clothes, and spent several months in a psychiatric hospital.

Wait: there is more!

With My Daddy in the Attic

Undoubtedly the attic idea came to her (Mia Farrow) from the Dory Previn song, “With My Daddy in the Attic.”  It was on the same record as the song Dory Previn had written about Mia’s betraying their friendship by insidiously stealing her husband, André, “Beware of Young Girls.” – Woody Allen Speaks Out

Not on the same record, but also from Dory Previn, is the song Mama, Mama, Comfort Me:

A shocking “revelation” ? Everyone knows about these photos since 1992!

Does the documentary says that Mia Farrow was agree to show in court the nude photographs of her daughter Soon-Yi Previn?

Both Woody Allen and Soon-Yi Previn were consenting adults and deeply in love – they still are 29 years later!

BTW, Soon-Yi Previn wasn’t the adopted daughter or the stepdaughter of Woody Allen: not only he wasn’t married with Mia Farrow but they never lived together.

And when Soon-Yi Previn was a child, Woody Allen was never a paternal figure for her, as acknowledged both by Soon-Yi, Justice Wilk and even Mia Farrow.

Even so, Farrow said she didn’t fault Soon-Yi because she was so young. When given the option to keep living with Farrow and her siblings, Soon-Yi moved in with Allen.

Really? Soon-Yi Previn wasn’t so young, she was 21 – but it well knows that Mia Farrow tried to lie about her real age –  and in 1992 she described Mia’s reaction in a VERY different way:

“Soon-Yi told friends she fled from her mother’s apartment because Farrow had punched her, hit her with a chair, ripped her clothing and repeatedly yelled at her in the middle of the night…”

Who can believe this old lie? Just like his mother has used her daughter Dylan Farrow as a pawn against Woody Allen, Ronan Farrow has used his sister’s for his own promotion.

Phone call seem something new. Without watching the documentary, analyze is delayed. – To update.

Maco, saying publicly he did have probable cause to press charges against Allen but declining, due to the fragility of the “child victim, a shocking revelation? This story has been quoted hundred of time since it was used by Maureen Orth in Vanity Fair.

Frank Maco never said what the “probable cause” was, nor in 1993, nor in 2014. Anybody reading the full statement instead of isolating “probable cause” understand that the true reason Frank Maco wanted to “avoid the unjustifiable risk of exposing a child to the rigors and uncertainties of a questionable prosecution” was because “even Justice Wilk, in doubting the success of a criminal prosecution and working in the framework of an evidentiary standard less severe than proof beyond a reasonable doubt, could not definitely conclude that sexual abuse had occurred.”

In others words, Maco was sure to loose against Woody Allen: he had zero evidence and even his own experts against him.

When a prosecutor has evidence someone is a pedophile and could hurt more children, he doesn’t let him gone free because he doesn’t want to drag his victim through the trauma of a trial, he prosecutes him.

Current and former prosecutors said they could not see Mr. Maco’s basis for rejecting his own experts. They also questioned why he kept the case open until more than six months after the hospital delivered its report.

Woody Allen sued Maco: a panel judged Maco’s actions to be “was inappropriate, unsolicited and potentially prejudicial” and also “violated the prosecutor’s obligation to the accused. The case ran until 1996. Maco was suspended for much of that time, losing his living, and costing the states hundreds of thousands of dollars in defence.