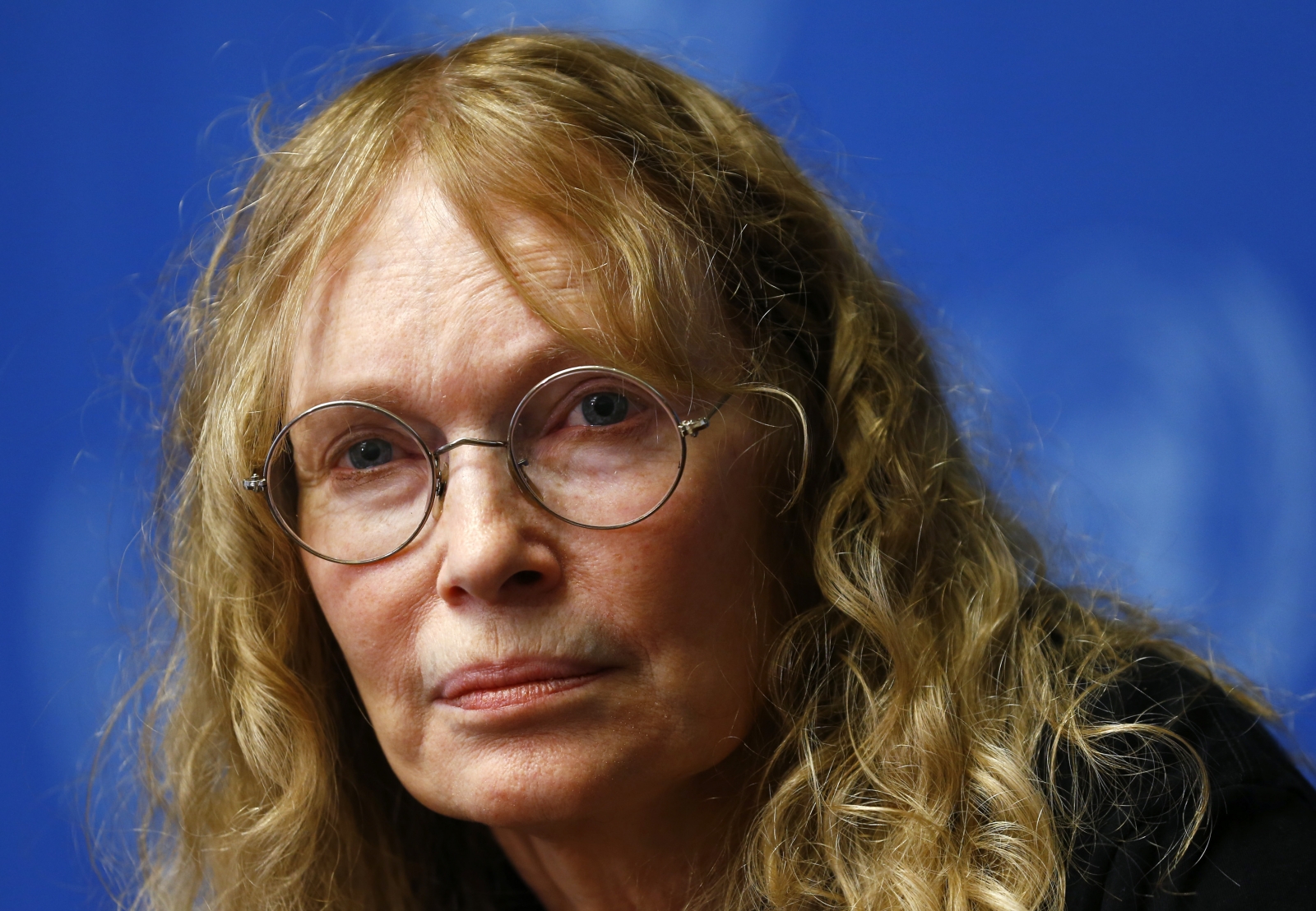 Mia Farrow is one of the worst human beings alive. She’s a complete disgrace for women and for humanity.

People supporting Mia Farrow and supporting her proven abuses and slanderous lies must be known and not forgotten: they are the first cause true survivors are not believed.

How much responsibility does Mia Farrow have for what happened to her daughter?

Children should never be hostages to their mother’s romantic hopes.

Sadly, it happens a lot.https://t.co/LD1AvM2pw6

In this post-#AllenvFarrow chat, the trio behind the docuseries reveal their biggest behind-the-scenes discussion and explain what would prompt them to do another episode https://t.co/mM600w2txZ

Exactly. How can you enjoy those scenes knowing what he did to Farrow’s family? The exculpatory dialog he wrote for Hemingway was so self-serving. https://t.co/43zpvJIgrj

Would highly recommend Allen v. Farrow on HBO. Not a single soul can sit through the miniseries and not believe Dylan. I also loved learning about the beautiful person and mother that is Mia Farrow… and on a shallow note, I am now obsessed with her country home in Connecticut.

Terrific insights in this persuasive piece by ⁦@LorraineAli⁩ about Allen v Farrow. https://t.co/71C0lWDwX6

The 3rd episode of #AllenVFarrow is SO damning, beyond the act of what happened to Dylan Farrow. It shows how corruptible all systems can be against any woman who dares to speak up. Hospitals and media alike were rigged to paint Mia Farrow as a monster. Incredibly disturbing.

Child abuse expert Michael Salter on ‘Allen v. Farrow’, its similarities with the 2019 documentary ‘Leaving Neverland’ and how both explore the collision of child sexual abuse allegations with power, wealth and elitism in the 1990s. https://t.co/sMM24ZpH1h

RELATED CONTENT. Even Mia Farrow’s Own Expert Criticized the Videotape

Good morning to everybody who is not Bob Weide, who put together this image/caption set for his blog which claimed Dylan Farrow was wrong about being sexually abused because she did not describe the correct kind of toy train she stared at during her trauma https://t.co/SKHPqgbwR7 pic.twitter.com/V23XIFwj1x

These deaths were the subject of an unbelievably callous and ugly assertion in Woody Allen’s book. This statement, from a woman who lost three children, deserves to be widely seen. https://t.co/vgtgZUDWwR

Woody Allen’s proclivity for teenagers/much younger women is literally written into his movies. Y’all can deny it all you want but he’s literally not hiding that shit.

The Woody Allen HBO doc reveals him to be even more of a psychopath than I even imagined.

What choice do we have https://t.co/TGucFgh7Vz

Watching “Allen v. Farrow” and feeling furious and heartsick. It’s so powerful. If you ever bought into the “woman scorned” narrative, I do hope you’ll watch it.

Cheryl Strayed – and her followers – is so smart that she believes in US you can marry your own child:

Seeing how the likes of Woody Allen was able to continue his career despite raping his own daughter has me motivated not to see this trend continue in our community. Predators must be called out or there will be more victims and I refuse to be complicit, even if it costs me fans.

“The very repetitiveness and predictability of sexual abuse are part of why the disbelief of women is often expressed as a refusal of pattern recognition.” I wrote about Woody Allen: https://t.co/A9vCYvpjFB

“It is oft noted that Woody Allen’s oeuvre is rife with young women coupling with older men; less remarked upon is the prevalence of crazy jilted exes who must be disposed of.”https://t.co/YvXfpeosCM

Woody Allen really did an interview thirty years ago where he said that if he were a child molester he would have already done it, that he’d “had plenty of opportunities” and thought that would make him look LESS suspicious

i wrote about woody allen and a part of the conversation i haven’t really seen that i think a lot of us are very afraid to address: the way in which we are taught by older men not to believe women https://t.co/CoC8i3PJ1b

Diane Keaton & I both studied at The Neighborhood Playhouse in NYC with Sandy Meisner. I’d so rather have spent 35 lucky yrs in Daytime television than have become an Academy Award Actress so beholden to Woody Allen that I ignored my moral compass in support of him.

Whoever uses the bs that he wasn’t prosecuted so he is innocent needs to watch the last episode #AllenVFarrow. That is WA spin and it’s an outright lie. @BobWeide #IBelieveDylan

Woody Allen started having sex with his stepdaughter when she was a teenager. That alone should have even enough to remove him from his Hollywood perch. Repulsive. #allenvsfarrow #allenvfarrow

Soon-Yi Previn wasn’t Woody Allen stepdaughter and was 21 years old when she began to date the director. – Sources

Thank you @RealDylanFarrow for your extraordinary courage. I am so sorry the system failed you and your family so horribly. #MeToo @MiaFarrow @RonanFarrow

Learn more about Mary L. Trump: Is Mary Trump Very Smart or Hypocrite ? Is she Racist?

For years the “train in the attic” controversy has swirled. Just watched episode 4 of Allen vs farrow they put that to rest.

fuck woody allen and his quirky dumb shit that I’m proud to say I always found dumb and self-jerking https://t.co/aQUzekkrch

Last week’s moment when Mia is asked to give a statement and simply says, “I will always stand by my children” is one of the most beautiful displays of maternal love that I’ve ever witnessed.

I believe @RealDylanFarrow and apologise for the disastrous system that betrayed 7 yr old you.
Sending a hug to @MiaFarrow. You’re a great Mom, a loving soul.
I salute @RonanFarrow for being a relentless advocate for Dylan and countless other sexual abuse victims. #FarrowVAllen pic.twitter.com/ZYdXgiuav0

The brilliant documentarians ⁦@AmyZiering⁩ and #KirbyDick have done it again. This time telling the real story of how #WoodyAllen has spent years lying about his abuse of @dylanfarrow and attacking @miafarrow for being a protective and proud mother. https://t.co/Oe1v7k9dkw